All the support for the workers of Ford! 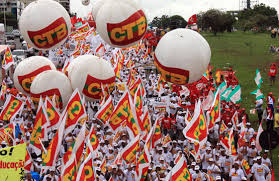 Read below note from CTB and FITMETAL about the closure of Ford plants in Brazil: CTB (Central of Workers of Brazil) and FITMETAL (Interstate Federation of Metallurgists of Brazil) repudiate Ford’s unilateral decision, announced this Monday (11/01), to close its three factories in the country. At two of these plants, Camaçari (BA) and Taubaté (SP), production will be stopped this Tuesday (12), with the immediate and irresponsible dismissal of thousands of workers in the middle of the Covid-19 pandemic.

The justifications used by Ford’s management do not take into account the billionaire resources that the automaker received, in the form of tax waivers, especially in the Camaçari complex. Although governments such as those of Michel Temer and Jair Bolsonaro have not invested well in the industry, a Federal Revenue survey estimates that incentives for Ford, between 1999 and 2020, were approximately R $ 20 billion.

It is unfortunate that Bolsonaro, in particular, is silent and omits in the face of yet another setback for Brazilian industry. But, unfortunately, it is less and less surprising that a company the size of Ford prefers to keep its business in smaller economies, such as Argentina and Uruguay, transferring qualified and decent jobs there.

In addition to workers – those most affected by the country’s accelerated deindustrialization – a way out of crises such as Ford’s must involve the government (federal, state and municipal governments), the automotive sector and other industrial segments. The directors of CTB and FITMETAL will support the union entities involved with Ford’s bases, especially the Camaçari Metalworkers Union, which has already called for an agenda of struggles in defense of job preservation. In Bahia alone, the Ford complex generates 12 thousand jobs, with 8 thousand in the factory and another 4 thousand in the auto parts sector, in addition to tens of thousands of indirect jobs.

All the support for the workers of Ford and the automotive complex, as well as their unions, in this battle in defense of life, jobs and rights!